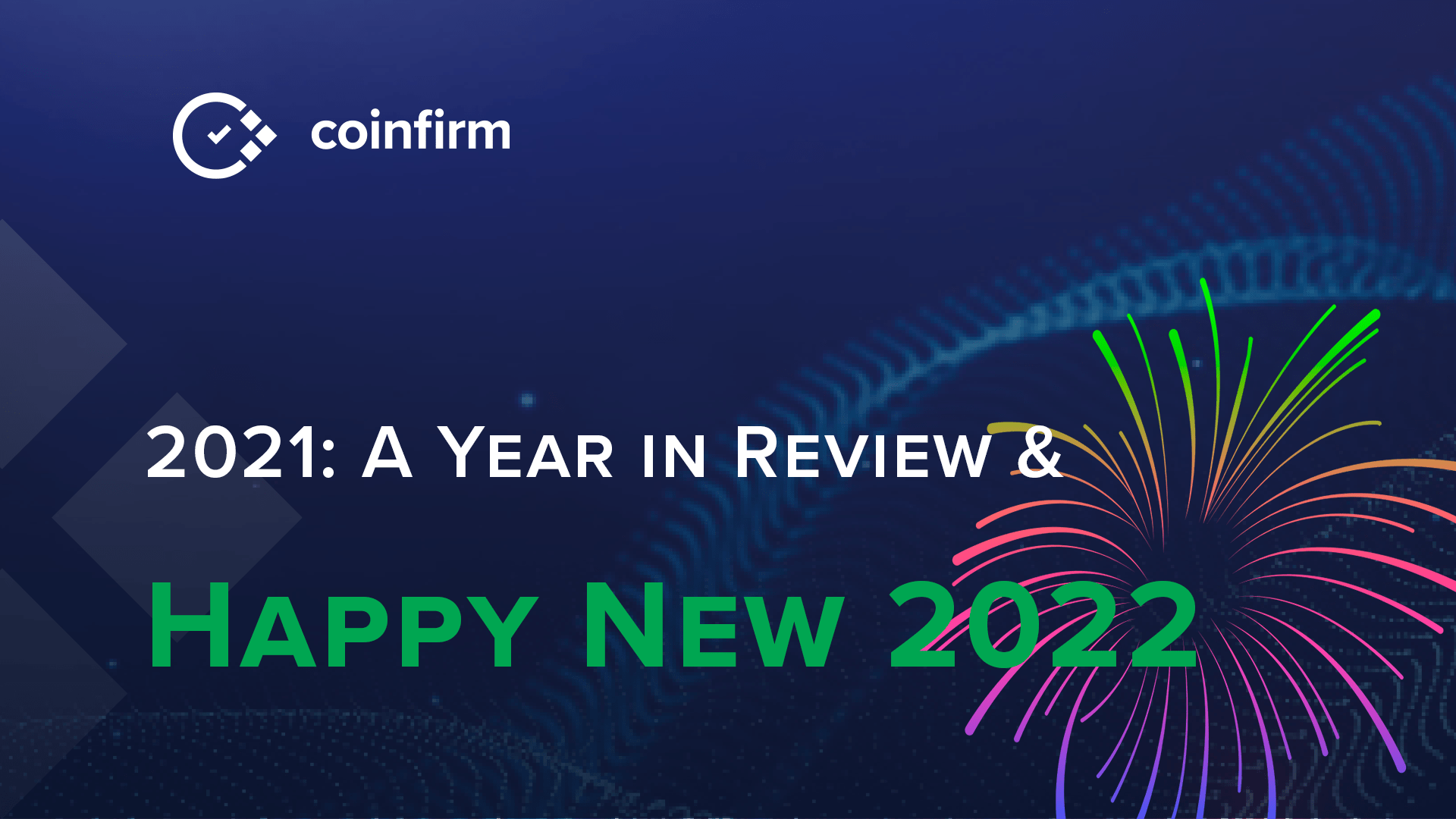 It’s been a very, very busy year for the crypto markets and the Coinfirm team. Here is our annual Year in Review for 2021.

The year has been a wild one for crypto, with a large number of high-profile hacks, new asset classes coming up such as NFTs, the metaverse and more. 2021 cemented cryptocurrencies as a mainstream investment asset class and effective hedge against rampant inflation, with the total market cap of cryptocurrencies jumping from USD 745 billion on December 31st, 2020 to USD 2.39 trillion today, a 220% increase YoY.

In response to the increased interest in the cryptosphere by retail investors and institutions alike, a plethora of governments passed regulations. But the response by nation-states has varied significantly.

In Asia, China’s government banned crypto, whilst India’s somewhat confused their market as to whether the industry was to be banned or regulated. In the Americas, the different financial regulators of the United States of America continued to debate who had jurisdiction over certain blockchains, firms and cases – leading to crypto exchange heavywieght Coinbase to issue their policy own suggestions – and El Salvador embraced Bitcoin as legal tender. In Europe, the EU inched closer to making Markets in Crypto-Assets (MiCA) law.

In addition, the World Economic Forum released their Decentralized Finance Policy Maker Toolkit. Coinfirm took a look at the cost to businesses of non-compliance for crypto-asset businesses.

Coinfirm analysed sanctioned blockchain addresses and those involved in terrorism financing, finding many addresses had not been on the radar of regulators. The firm also took a look into other serious forms of crime such as ransomware and its destabilising effect on society such as in the case of the JBS attack.

In relation to hacks, Coinfirm’s Investigations team picked up on the fact that the Impossible Finance and Eleven Finance flash loan attacks were carried out by the same black hat hacker and looked into Miner Extractable Value and its ability to be used in a DeFi hack in our Cream Finance exploit investigation.

We found that Vitalik Buterin, the prominent co-founder of Ethereum, had received funds from the infamous Poly Network hack.

Coinfirm took a deep dive into the regulatory landscape of blockchain smart contract code auditing regulations, spurred on from the firm’s investigations into DAO Maker and Vee Finance.

As the COVID-19 vaccine rollout across the world took place this year, criminals sprung to take advantage, with Coinfirm discovering that the darknet was being used to hawk fake vaccines, stolen vaccines and proof of vaccination certificates.

Later in the year, the firm had analyzed various privacy features of blockchains including CoinJoin and crypto mixers/tumblers and also found during an analysis of Uniswap’s V2 liquidity pools that a significant number of pools are in actual fact rug pulls.

2021 was also the year that NFTs exploded, epitomized by the sale of “Everydays: the First 5000 Days” from digital artist Mike Winkelmann, known as Beeple, for USD 69.3 million.

But with that increased interest also came interest from scammers with wash trading and exit scams such as that exemplified by the case of Evolved Apes.

In addition to NFTs, the ‘metaverse’ captured the attention of the masses, not least due to Facebook’s rebrand. According to some sources, the predicted value of the metaverse could be worth $800 billion by 2024.

Coinfirm minted a number of strategic partners, including law firms Nagel + Associates and Stelios Americanos. In addition, we partnered with Notabene for compliance with the ‘Travel Rule’, Authenteq, a virtual identity provider and ICTS, a large South American security firm.

Coinfirm was proud to announce our work with PKO Bank Polski and the National Clearing House for tracking the ownership of Polish government bonds, with the participation of Poland’s Ministry of Finance (in a European first). This was not the only official announcement of Coinfirm’s work with the public sector this year, with the firm also disclosing that Gibraltar’s FIU was utilising the AML Platform.

Coinfirm’s Product team has been hard at work making a number of changes to the AML Platform so that crypto anti-money laundering compliance is more efficient for compliance teams.

These included; extending the platform’s token coverage with an additional 4,000 new tokens – integrating a number of unique blockchain protocols such as Stellar, Rarible and The Graph – being the first crypto AML firm to support NFTs, including Risk Sources of flagged indicators, adding Transaction Reports to the platform, updating the Monitoring Panel and giving clients and partners the ability to customize Risk Scores on the platform, including whitelisting of counterparties.

In addition, Coinfirm added C-Live as a tool to track stolen crypto assets in real-time and created AML Liquidity Pool Risk Reports so that large liquidity providers could reap the yield of decentralized finance whilst being in compliance with AML regulations.