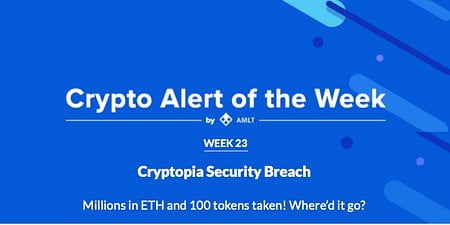 Coinfirm documents interesting or high profile frauds and hacks that have recently happened and been reported into our networks to show how the AMLT Network can help track and prevent it in the future. Today we take a detailed look at the Cryptopia cryptocurrency exchange hack.

A major New Zealand Cryptocurrency Exchange with over 2M users (source), Cryptopia, announced unscheduled maintenance on the 13th of January which caused a problem that their users could not log in, deposit or withdraw cryptocurrency assets.

An official statement has been issued by Cryptopia 13 hours later where they stated that they had suffered a security breach that caused significant losses.

You can track the whole path of stolen coins thanks to Coinfirm’s tool – Visualizer as you can see below:

The AMLT Network allows entities to report such incidences as the Cryptopia crypto exchange hack attack and related addresses and once the data is analyzed and confirmed to be correct, the data is implemented to the Coinfirm AML Platform and the Network Member who provided the data receives AMLT tokens as their reward. This system could allow in certain cases like this for entities to know where the stolen coins are coming from and potentially freeze them or prevent further proliferation of risk. Providing a new layer of transparency and security that the entire economy can participate in and benefit from.

According to Cryptopia, no further announcements will be made, please stay tuned we will give you a heads up once further information by them is released.