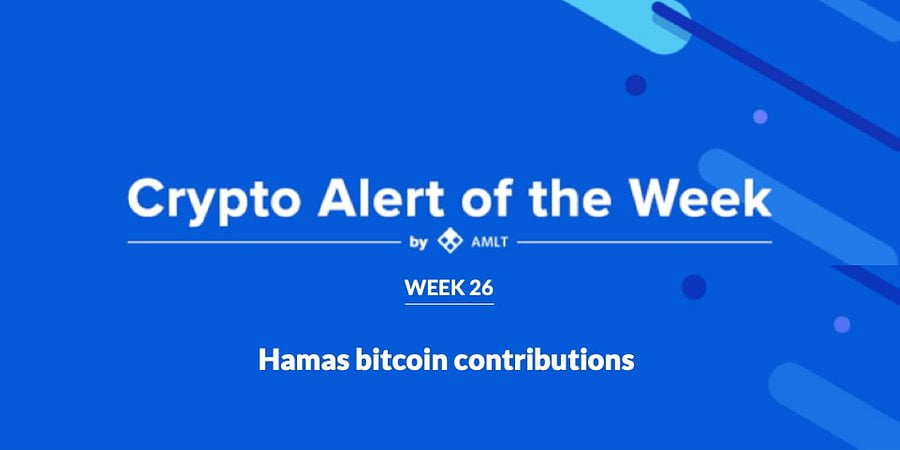 A few days ago Hamas announced that they are going to reveal their Bitcoin address for donation purposes as mentioned by Bloomberg (source), which garnered quite a bit of attention in and out of the crypto world. This address was published on the 31st of January and since that time has received over 0.448 BTC (around $1,550) in 22 Bitcoin transactions and 796.97 USDT (Tether)in 1 transaction, resulting in almost $2350 in total. Somebody also decided to send a few cents to their Bitcoin Cash address however the donated amount was very small 0.00036529 BCH in total approx. $0.04 in 4 transactions at the time of writing.

worth ~$4,428Just as traditional currencies are used for these nefarious purposes, cryptocurrencies can be used by terrorist organizations to support their illegal organizations and for any other form of illicit activities. That is why Coinfirm monitors the crypto space, allows the market participants to submit data through the AMLT Network and updates its database to make sure that any party which interacts with high-risk addresses including this one below will have a higher C-Score. Please note that any donations to this address and any received payments from this address might increase your C-Score. For your safety please stay away from this address. These addresses have got the highest available risk at Coinfirm which is 99 as attached below:

We went a little bit more into details and investigated who decided to contribute to Bitcoin and the facts are extremely interesting. The analysis was done by Coinfirm’s tool called Visualizer and it shows that somebody deposited almost $1133 (~0.3276 BTC) from one of the biggest cryptocurrency exchanges to one of their addresses.

As mentioned earlier, any address interacting with this high-risk address will get a higher C-Score because it is in close proximity to addresses related to terrorism financing so any address donating is going to be similar to the one below: