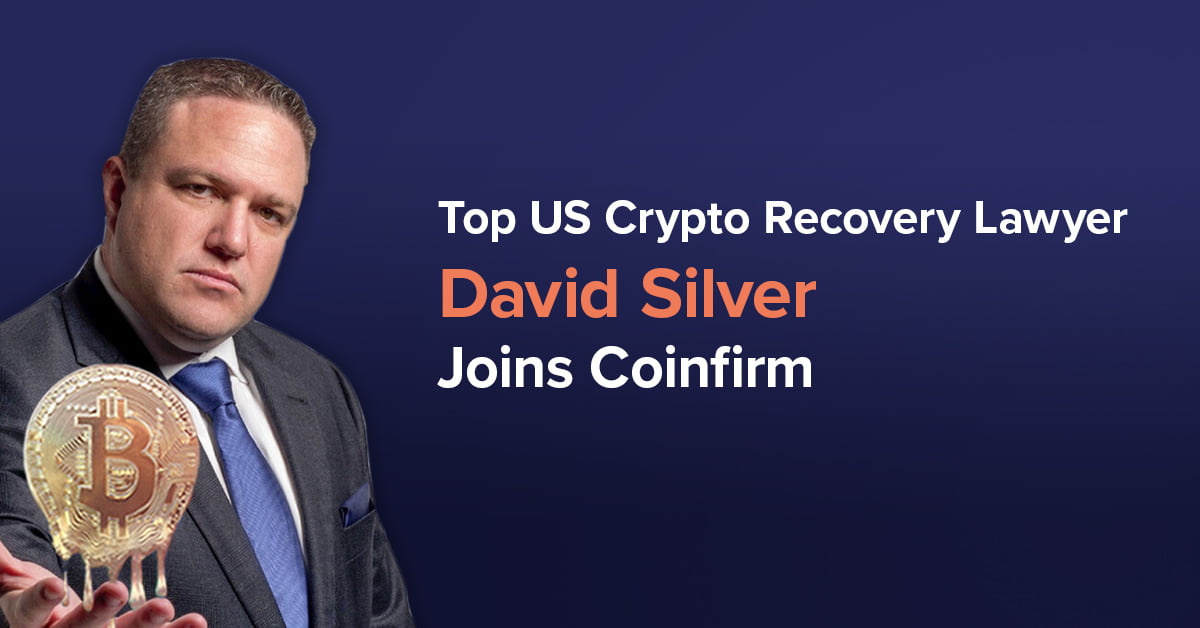 LONDON, 12th November – Coinfirm – the industry leading blockchain analytics and anti-money laundering solutions platform in the emerging world of cryptocurrency – is pleased to announce that top U.S. crypto recovery lawyer David Silver from the Silver Miller law firm joins Coinfirm as a member of its Board in the United States to further aid defrauded investors recover their wrongfully-taken cryptocurrencies, now worth more than 20 billion USD. This is another big step in this pioneering area after the successful launch late last year of Coinfirm’s ReclaimCrypto service.

David Silver is the co-founder of Silver Miller, a law firm that in 2014 filed the first lawsuit against a cryptocurrency exchange in the United States. The case (Bonow v. Project Investors, Inc. d/b/a Cryptsy) started David Silver down a road of cryptocurrency litigation which has included lawsuits and arbitrations against a plethora of the most notable members of the cryptocurrency world including; Coinbase, Kraken, Bittrex, Poloniex, Xapo, Indodax, Coincheck, Cryptsy, NANO, Monkey Capital, Giga Watt, Menlo One, Gamedex, BitConnect, and OneCoin. Recently, Silver Miller has filed and resolved nearly one hundred SIM swapping cases against AT&T, Verizon, and T-Mobile representing customers whose accounts were compromised and whose cryptocurrency was consequently stolen.

Coinfirm and Silver Miller’s relationship was spurred after David Silver noted Kroll and Coinfirm’s collaboration on a cutting-edge project which combined the latest blockchain forensic techniques with the more established world of legal investigations and asset recovery, subsequent to which Silver reached out to Kroll for an introduction. After his first conversation with Pawel Kuskowski, CEO and co-founder of Coinfirm, David Silver said: “I was blown away! The Kroll/Coinfirm partnership was the missing link in my crypto litigation practice – locating and reclaiming the stolen crypto.”

As the world has evolved towards cryptocurrency becoming an acceptable mainstream investment, there is an increased need for regulatory consulting, security and investigative work related to crypto exchanges’ questionable implementation of anti-money laundering regulations, and the ability of crypto exchanges to know exactly who their customers are. This need has placed crypto litigation as a central pillar to the success of legitimizing this asset class and demonstrating to crypto investors that worldwide, public accountability will marginalize bad actors in the space.

Coinfirm continues to look for and work with companies and individuals who expose fraud, regulatory breaches, and wrongdoing. CEO of Coinfirm Pawel Kuskowski stated that “Coinfirm deems Silver’s sterling reputation as a forerunner in the space as paramount to be strengthened for the benefit of creating a safer blockchain economy. There are millions of victims of crypto-related crime that need our help, and I know that with his experience, we can further expose bad actors.”

Both Coinfirm and Silver Miller believe that part of the next wave of mainstreaming global participation in cryptocurrencies is professional grade transparency. “What I have learned in six years of crypto litigation is that ‘transparency’ means different things to different people,” Silver said. “We only look to work with people and companies who want to expose fraud, and Coinfirm impressed me with its trailblazing analytics and ability to identify which exchanges’ public proclamations of compliance were not actually backed-up by full implementation of those policies.”

After working together over the last year, Kuskowski and Silver began talking about how Silver could contribute to Coinfirm from the inside. “I pride Coinfirm’s work of increasing compliance integrity of stakeholders,” Kuskowski said, “and to that end, what is necessary are those right people and partners bold enough to shine a light alongside us.”

Silver Miller will continue to work closely with Coinfirm holding crypto fraudsters accountable, locating stolen funds for the victims of fraud, and generally increasing the safety for participants in the fast-growing cryptocurrency world.

Coinfirm is a global leader in AML and regulatory technology for blockchain and cryptocurrencies. It offers the industry’s largest blockchain coverage, supporting over 1,500 cryptocurrencies and protocols including Bitcoin, Ethereum, Hyperledger, and many more. Coinfirm’s solutions are used by market leaders globally, ranging from crypto exchanges such as Binance, and protocols like XRP, to major financial institutions like PKO BP. The company’s services also include Reclaim Crypto, as well as Trudatum, a standalone regtech platform that allows any file to be registered, signed, and verified with 100% accuracy.

The firm also carries out industry analysis demonstrating compliance strengths and weaknesses in the crypto sector as seen in the Know Your Exchange report.

The ultimate guide to Bitcoin Forks