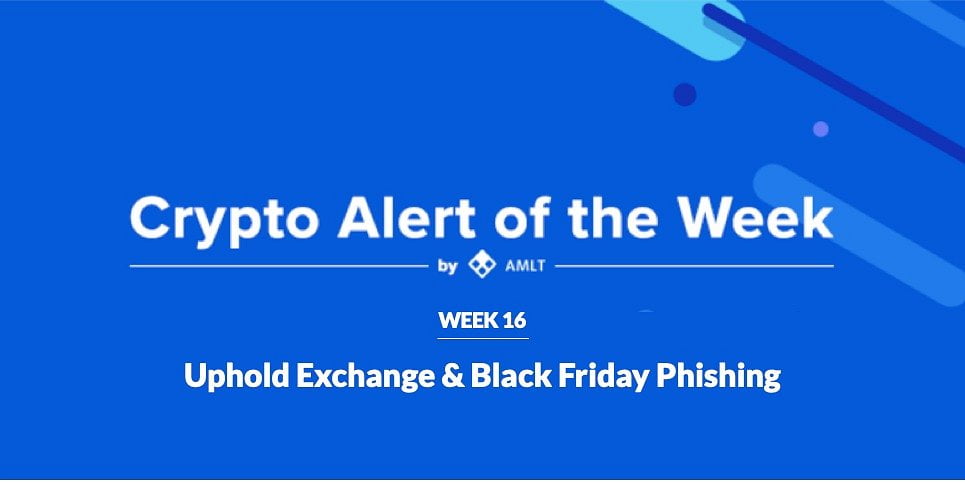 Coinfirm documents interesting or high profile frauds and hacks that have recently happened and been reported into our networks to show how the AMLT Network can help track and prevent it in the future. Today we conduct an investigation into the Uphold phishing attack.

With Black Friday being such a big event, being a tradition appropriated to Europe as well, it doesn’t come as a big surprise that many scammers would try to use it as a way to disguise their own campaigns. After all, some people wouldn’t be surprised even with finding a discount on cryptocurrencies on this day along with how crazy some of the promotions are on that day.

As might have been expected, the latest notorious phishing campaign involved a popular, US-based cryptocurrency exchange, Uphold. The email, contrary to how rushed and grammar-lacking the usual campaigns are, looked pretty professional. It was also very much in line with how the company’s emails looked visually.

Then there was the message urging potential victims to send their 0.1-50 BTC to a “special” address, which is supposed to return their deposits with an additional 15% bonus (adding up to 450$-222,000$ at that time).

Thankfully the phishing wasn’t that successful. The campaign has only managed to collect 0.5 BTC. Uphold itself has tweeted a message, warning its customers and temporarily freezing withdrawals until contacting its customers. What’s even more serious about it, is that the phishing emails were sent from an official domain, which, as they have also said, might have been compromised and only added more legitimacy to the attackers.

At Coinfirm we believe in setting the highest standards for the industry. If anyone notices such an attack, they can report the attacker through the AMLT panel or widget. The submitted data is then analyzed and processed by our data science team for validation of submitted data. Once flagged entities using the Coinfirm AML Platform such as exchanges can see the source and potentially freeze the funds and prevent further risk spreading through the ecosystem. This helps the crypto economy become safer and more transparent while fighting malicious actors. You can see how the below in the Coinfirm AML Risk Report created for the fake Uphold phishing address: